President Obama has clearly said that he intends to treat America’s allies as equals. I take this to mean that his administration is open to the opinions and suggestions of their allies when the two sides sit down to discuss policy issues. The old “Top dog, Underdog” days are dead and gone. Or so we have been led to believe.

Reality has so far shown that what we are getting is more of the same old thinking and behavior: We are the top dog here, and you are expected to do as we wish without so much as raising an eyebrow. When we tell you to jump, the only thing we’ll accept from you is the question “How high, sir?” If you want to kill trust, this is one of the better ways to do it.

I am becoming more that a little annoyed with America’s petulant grousing about the Hatoyama government's taking President Obama at his word by dealing with American officials as equal partners in discussions on policy issues. If President Obama is serious about meeting with allies as equal partners, he needs to begin acting that way. The words coming recently from Secretary Gates and others within the administration give the clear impression that the Obama administration expects Japan to kow-tow to their wishes without so much as raising a question or offering an opinion. This is a replay of the arrogant “Just who do you think you are talking to!?” attitude that kills trust and plays well with no one. As an American, I find it disgusting and deeply troubling.

Frankly, I think it is high time allies begin showing America that they expect to be treated with respect as equals,  especially when the “senior partner” says it is their policy to do so.

I am proud of Prime Minister Hatoyama and his Ministers who, ever so politely, have been showing President Obama that they intend to hold him to his word. I applaud them for it. Mister Hatoyama certainly has my support. 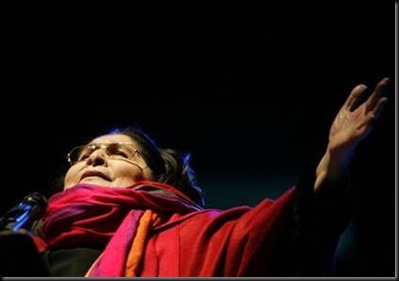 My wife showed me an article about her passing in her daily Hokkaido newspaper yesterday, and it feels like I’ve lost a much-loved member of my family. A year younger than me, I think of her as a sister.

I first encountered Mercedes Sosa in 1977 when my Spanish instructor at the University of Minnesota showed me one of her albums, “Cantata Sudamericana”, which I still have. From the minute I heard her voice, I was hooked. It is full, rich, captivating. Her voice, her personality and her music captivated millions across South America and around the world.

Born in Tucuman, Argentina, she began her singing career at age 15, when she won a contest on a radio station. She was still singing 59 years later when she took sick and entered a hospital a few weeks ago.

Her music was always about the people: the poor and disenfranchised, the sick, the old and the persecuted victims of the military dictatorships that hated and persecuted her.

Doña Mercedes, I bow to you. Gracias, mi hermana; gracias por su vida y su canción. Rest in peace. Thank you for blessing us for all your life with all that you are.

Posted by George Polley at 8:10 AM No comments: