So sad to fall in battle 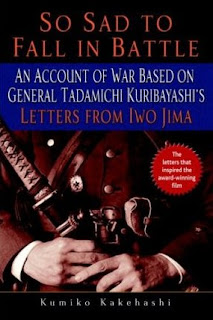 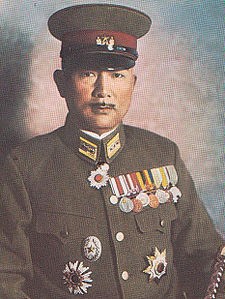 General Tadamichi Kuribayashi
7 July 1891 - c. 26 March 1945 (age 53)
A review of Kumiko Kakehashi: So Sad to Fall in Battle, An account of war based on General Tadamichi Kuribayashi’s letters from Iwo Jima. Ballantine Books, 2007.
As I Read Kumiko Kakehashi’s book about Iwo Jima’s commanding General Tadamichi Kuribayashi I had the feeling that, had we met, I would have liked him. He was a compassionate man who helped his wife, had their servant eat at table with the family, and worried about them right up to the final battle on Iwo Jima.
Kuribayashi was the kind of leader who commanded respect because he gave it to everyone, from the lowliest recruit to the top-ranking officers under his command. He cared about them, worried about them, and was attentive to their needs. “The army was an institution where social class distinctions were carried to an extreme … [F]or Kuribayashi to be so open and friendly with his ‘inferiors’ made him a most unusual officer (page xiii). This also made him unpopular with the military High Command in Tokyo.
Kuribayashi was meticulous in designing a plan that would protect them for as long as possible while at the same time inflict the most damage to the enemy. Though it “was completely contrary to the traditions of the Japanese army … and was derided as rash and aroused universal opposition at the time” (page 38), he held out for over a month and frustrated the goal of the Allied Command of defeating the Japanese in under a week. The Japanese military command lacked Kuribayashi’s grasp of on-the-ground reality and attention to detail. “The grimmer the reality,” Kakehashi writes, “the more commanders have to face it directly” (page 63) He “verified things with his own eyes, and never allowed preconceptions or wishful thinking to cloud his judgment. His strategy was effective in battle precisely because it originated from such a starting point” (page 63).
And in the midst of it all, the daily preparations, the sweat, the inadequate supplied and resistance from people in Tokyo, he wrote daily letters to his wife and family in which he expressed love and concern for them and their welfare.
Why, when he knew he could never win, did he keep fighting when he could have surrendered and saved the more than 20,000 men under his command that died in the battle of Iwo Jima? Honor aside, the reason was keeping the airfield on Iwo Jima from the Allied forces for as long as possible so they couldn’t use it to carry out massive attacks on Japan’s main islands. Sadly, with the advent of Boeing’s B-29 Superfortress bombers, these attacks had already begun.
If it dawned on him that these attacks had begun, it might have thrown him into despair. According to Kakehashi, there is some evidence that it did. Sergeant Ryumae Shinya, who was in close proximity to him, wrote: “When we escaped from the Command Bunker in the dead of night on March 17, he was not energetic… At first glance … he looked like some old man from the countryside being led outside by his children” (pages 189,190). “The sight of the weak, emaciated, and ghostlike soldiers dying in such number as they faced the terrifying intensity of the American assault on one hand, while suffering from hunger and thirst on the other, seems to have been a crushing blow for Kuribayashi” (page 191). “When he heard the news” (of the firebombing of Tokyo), (his) despair and sense of failure must have been tremendous. He did not even know if his wife and children were alive. They were, in fact, safe and sound – but he had no way of knowing that.” For a compassionate man, I don’t see how it could have been otherwise.
In his final telegram to Tokyo, with a copy to his wife, he wrote “so sad to fall in battle.” And indeed, as it always is, it was. General Kuribayashi’s body was never identified. He had removed all insignias of rank from his uniform before the final charge.
Quite a man and quite a book. I give it a hearty ***** rating.
Posted by George Polley at 8:46 AM No comments: 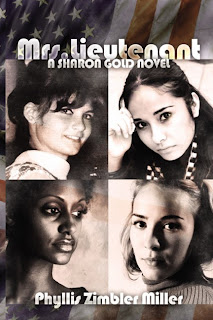 “Mrs. Lieutenant: A Sharon Gold Novel”, by Phyllis Zimbler Miller. Publisher: BookSurge, 2008. Available in paperback and Kindle editions.  ISBN-10: 1419686291, ISBN-13: 978-1419686290.
Phyllis Zimbler Miller’s “Mrs. Lieutenant” is one of those stellar reads that keep you engaged from the first word to the last and how long or how short the book is doesn’t concern you at all. Keep a box of tissues handy, because you’ll need it; I certainly did, and more than once.
If you are a military wife, have been one, or know one or more, then this will tell a story that you are intimately familiar with. If you’re not, it doesn’t matter; it’s the people and their stories that bring you in, keep you there, then linger in your memory for a long time after.
Four newly-married women from different backgrounds meet at Fort Knox, Kentucky where their husbands are enrolled in nine weeks of Army Officers Basic. Sharon and Robert, Kim and Tim, Wendy and Nelson and Donna and Jerry, each from very different backgrounds, each fearing that they could lose their husband before the year is out, each expected to conform to the strict formal rules of the Mrs. Lieutenant booklet each is given. As it says in the booklet, “when a man acquires a commission, the government has gained not one, but two – the officer and his wife.”
The day that Sharon and Robert God leave Chicago to drive south through Indiana to Fort Knox, members of Ohio’s National Guard fired sixty-seven rounds in thirteen seconds, killing four students and wounding nine others, one of whom suffered permanent paralysis. A few days earlier, on April 30, 1970, President announced that he was sending troops into Cambodia.
And in only nine short weeks, each woman’s husband could be send to Vietnam, where 2nd lieutenants had the highest death rate of any combat soldier. Remember, these are newly married women on their way to a world that, except for Donna who grew up an “Army brat”, is like living in another world. Not only that, the racial and ethnic prejudices of the day were obvious, very uncomfortable and lead to one tragedy.
Though 1970 is forty-one years ago, with two wars going on I imagine the worries today’s military wives have are not all that different from the ones these four young women had back then.
Sharon and Rob, Kim and Jim, Wendy and Nelson, Donna and Jerry. Because of the year and their differences, each one stands out. Sharon and Rob are Jewish, Wendy and Nelson blacks from the South, Kim and Jim Southern Baptists, Donna Puerto Rican, and Jerry an Anglo. Back in 1970 when, even in central Illinois where I lived, some of the towns (like the one I lived in from 1964-1966) were “sundown towns”; blacks could go fishin’ there, but they daren’t be in or near the town after sundown. The very thought still makes me cringe, but that was the reality then.
Mrs. Lieutenant is more than a novel about the challenges of being an Army officer’s wife in a time of war; it’s about friendships that develop when people see each other as people and their differences as minor. And therein lies its appeal. Go to Amazon.com, pick up a copy, and settle in for a special read.
Mrs. Lieutenant is a book that, in my book, has a very wide appeal. I hope the subtitle “A Sharon Gold Novel” means that we can expect more from this remarkable writer.
An easy *****

The Bible Unearthed: Archaeology’s new vision of ancient Israel and the origin of its sacred texts 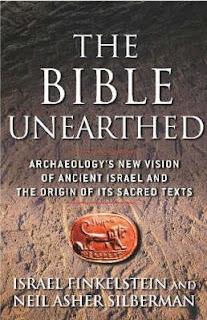 First published in 2001, Archaeologists Israel Finkelstein and Neil Asher Silberman's fine book will challenge people with an orthodox view of the Bible because, as the archaeological record shows, many of the events recorded in it,did not take place quite as the narrative says.


As Finkelstein and Silberman – both archaeologists – show, the archaeological record tells a very different story from the traditionally accepted one. Their story is more believable and, as it turns out, more accurate than the orthodox view of the Bible is historically pretty accurate, and events like Joshua’s battle against Jericho, the Exodus, and the great kingdoms of David and Solomon were true. Archaeology shows that they could not be, because there is no record of them where and when there should be.
“The power of the biblical saga,” they write “eloquently expresses the deeply rooted sense of shared origins, experiences, and destiny that every human community needs in order to survive” (page 318). The biblical saga is woven together from myth, folktale, origin and hero stories, songs and poetry from different times creating a story that met the political needs of specific times. “The authors and editors of the Deuteronomistic History and parts of the Pentateuch gathered and reworked the most precious traditions of the people of Israel to gird the nation for the great national struggle that lay ahead” (page 283). What was needed was “a great national epic of liberation for all the tribes of Israel, against a great and domineering pharaoh, whose realm was uncannily similar to its geographical details to that of” pharaoh Pammetichus, who reigned during the 7th century BCE.
The archaeological record shows conclusively that the great events of Hebrew history (the Exodus, the origins of Abraham, Isaac and Jacob/Yaakov, the great kingdoms of David and Solomon) did not happen as written, and that there was no place in geography called “Eden” where God once wandered in the forest. Biblical history “was not history writing in the modern sense. It was a composition simultaneously ideological and theological” (page 284). In other words, the Deuteronomistic History and the Bible itself are compilations woven together over time to tell the religious and cultural story of a people, much in the way that the Popul Vuh (Book of the People) – a collection of mythistorical narratives of the Post Classic Quiché kingdom in Guatemala's western highlands – were collected.
This is not a point of view that will go down well with fundamentalists who insist on making science conform to their literalistic reading of the Bible as accurate history. But it makes the Bible – these ancient stories – more acceptable to people like me because it makes the narrative more real and “true” as myths are “true”. And in ancient times, myth and factual events were more often interwoven than not. George Washington, for instance, didn’t have to actually chopped down a cherry tree for me to understand the “truth” of the story – that George Washington could be trusted because, when asked about the tree, he told the truth.
Reading the Bible this way, it is easy to place various parts of the narrative within their historic context (such as specific dress and dietary rules) rather than having to see them as truths-for-all-time-and-all-people, as the literalists see them. I found the book both fascinating and a joy to read. It was published by Touchstone in 2002.
Posted by George Polley at 3:54 PM 1 comment: