An important, disturbing and timely book -- James Carroll: House of War: The Pentagon and the Disastrous Rise of American Power 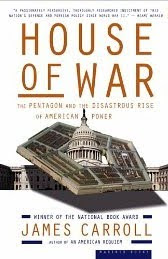 Once I picked James Carroll's huge history of the U.S. Defense Department/Pentagon, I couldn't put it down. It is fascinating, upsetting, and because I lived through its history, utterly believable. But it has not been popular with everyone: some reviewers have panned it as distorted and biased (they are in the minority), and I would guess it has received a very negative response from the Bush Administration, the Pentagon and the CIA.

Three things stand out for me in this fine book: (1) the power of the military-industrial complex that President Eisenhower so eloquently cautioned against; (2) the power of the Defense Department bureaucracy over other branches of government, including the President and Congress; and (3) the insanity of some of its top officers and their political allies as they planned and contemplated devastating attacks against those whom they considered enemies. When people talk about plans to drop atomic and hydrogen bombs and killing hundreds of millions of "the enemy"; when they talk about "winning" when only three people have survived such a holocaust (two of "us" and one of "them", those people are out of their minds. They are not living in reality. They are insane.

If James Carroll's massive book does nothing else, it eloquently documents what happens when leaders begin to think in terms of "us" versus "them", to divide the world into opposing camps of "winners versus losers", "us" versus "them", and arm themselves with weapons of such appalling destructiveness that the consequences of such recklessness is mind-numbing to contemplate.

I've recommended this book to everyone I know.
Posted by George Polley at 4:28 AM